This year for Valentine’s Day, I got a wild hair and decided to make a grand romantic gesture for my wife, thereby making all the other husbands in the area look like chumps. I do this from time to time as part of my ongoing plan to fool her into staying married to me, but it’s still rare enough that it always comes as a total surprise to my wife, who would’ve been perfectly happy to get takeout from Applebees and watch sitcoms all night – God bless her.  But not this year!  I lined up a sitter, made dinner plans at the Curtain
Call Lounge, bought fancy truffles, and picked up two tickets to Riverdance at the Fox.  Watching dancers isn’t really my cup of tea – although I don’t actually care for tea, so maybe that’s exactly what it is – in which case watching dancers isn’t

my cup of grape Kool-aid, but regardless, my wife loves the music and had yet to see the show, making this the perfect gift.  The only unfortunate part was that she chose me to accompany her, but such is life, she was happy.

I, however, was wholly unprepared for this experience, knowing very little about the performance going in, save that it would consist of tap dancing redheads in a long line; it turns out that was a gross misconception.  First of all, the show was dreadfully devoid of redheads, which was the aspect I was most excited about.  Let me also state for the record that, while I have seen Swan Lake, and been forced to watch West Side Story, I am not an enthusiastic fan of ballet, and was less than excited to see that it would play a part in this show.  In fact, my overall opinion of the show may have been slightly colored by my opposition to watching people flitter around in tights.  That being said, the male lead in the show – who, it should be noted, looked a lot like a young Vanilla Ice (appropriate given the age of the production) – was amazingly talented and, dare I say, as bad-ass as a tap dancer can possibly be.  At one point during the first act he even came out dancing in leather pants!  I cannot imagine the sheer volume of baby powder he must’ve sprinkled into those to prevent friction heating from reaching dangerous levels, and I have to believe they need to be cut off with some sort of dance-specific jaws-of-life contraption between scenes.

So anyway, as the show progressed, it became clear that it would be a mix of song, dance, and storytelling that both showcased the highlights of Ireland’s culture, and chronicled the tumultuous lives of her people… or something…I couldn’t help but feel that there was some sort of overriding narrative that I wasn’t getting, which was frustrating.  As near as I could tell, it went something like this: Somewhere around 1994 (to judge from the set pieces, which could’ve come straight out of an episode of ‘Saved by the Bell’) a bunch of very bouncy Irish people settled by a foggy river.  The river was so foggy in fact, that the first few rows of theater patrons completely disappeared during the portions of the show that took place nearby!  Anyway they (the Irish people, not the theater patrons) worshiped the sun, which made them want to dance, and also, apparently, the moon – or some sort of Queen of the Night/Devil Lady – that part was unclear – but regardless, what was clear was they also wanted to dance at night. And dance they did, until one day, there was a great potato famine accompanied by some sort of enemy troops, which may have been related.  One possible explanation for the lack of potatoes is that these unnamed enemy troops were harvesting and eating them all while the Irish farmers were busy dancing with the Devil Lady under cover of darkness. 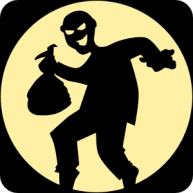 Unfortunately, the show did not explore this possibility, because it was time for an instrumental break during which a very talented musician played a tune on what sounded like the electric bagpipes – it was hard to tell from where we were sitting.  There was even one part where he played a vibrato!  If you’re wondering what vibrato electric bagpipes might sound like, the answer is “exactly what you think”; moving, but in a hilarious sort of way.  Then there was an intermission, during which theater personnel walked the aisles selling ice cream like popcorn at a ballgame.  I desperately wanted some, but unfortunately this was the one time my pregnant wife wasn’t hungry, and my suit was already a little tight, so I couldn’t justify buying any which – in my opinion – was the worst part of the show.  But no matter, for this was a short interlude, as we were quickly thrust back into the foggy action for act II, during which the Irish people became greatly depressed (maybe because they also missed out on the ice cream) and hopped onto ships with all the whiskey they could carry to sail away in search of a better life, and presumably a river that generated less eerie mist.  Where they were headed wasn’t addressed, but I’m guessing new York City in search of jobs in law enforcement – anyway, at one point during the trip, Kate Winslet attended a raucous party down in steerage class, grabbing a beer and climbing up onto a table 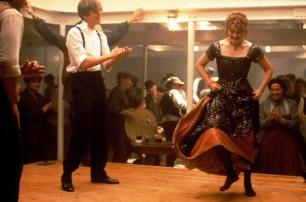 to dance right before they hit…wait, no, wrong boat full of poor people.  What actually happened was that some of them made it to New York and had ‘you got served’ style dance fights (albeit much nerdier ones) with black tap dancers on street corners – possibly the same street corners where the Puerto Ricans fought each other in West Side Story – much of the dancing was very similar.   Broadway was both very light-footed, and very dangerous back in the day… but anyway, not everyone made it to New York – several of the ships got lost (probably because of all the whiskey) and ended up in what appeared to be Russia, and maybe Spain.  Everyone danced there too, but there seemed to be less fighting.  A generation later (circa 2005), everyone came back to the Irish river and times were good again, because all the new kids knew the same old songs, and they hung out and danced together again.  But not before they paused for another moving instrumental break during which Fat Kenny G wandered on stage to bust out some slow jams on the soprano sax.  He was joined shortly thereafter by his buddies Fiddles McGee – who tore up the stage with his lively jigs – and Gus on the Irish recorder, which is pretty much just a regular recorder, but with freckles. Once the dancers were good and rested they came back and tap-tap-tapped

the musicians back into their seats so there would be room for the big finale, during which they expressed the joy of their ancestors by hopping and bouncing and flailing their legs wildly while forming a long line across the stage.  The lead male character was so excited, in fact, that he brought back the leather pants from act I – presumably with another tub of baby powder – you never can be too careful.  And so they were happy again – happy enough that they took as many as 6 opportunities to bow for applause.  And I was happy too, because I finally got to see the tap line I’d been expecting from the beginning.

However, while I was impressed by all the sparkliness and clacking, and honestly blown away by the performances of the tap dancers – who’s knees moved in ways that a healthy person’s most definitely should not, like marionettes being violently bounced across the floor – I have to say that Ireland seems like a very strange place, and I cannot in good conscience recommend visiting without further research.

To that end, I did some digging on the internet to determine the origins of all this goofiness.  My wife has always claimed, and several internet stories confirm, that one possible origin of this style of movement was that a dancing ban was put in place by the early Catholic church and enforced by the British soldiers that occupied Ireland during this time.  The theory goes that the soldiers couldn’t tell people were dancing when looking in windows because they (the people, and possibly also the soldiers) were stiff from the waist up.  I personally question this theory because – while maybe not the brightest bulbs in the box, as evidenced by their marching into enemy fire in straight lines and wigs –

the Brits did manage to create an empire spanning a large portion of the known world, and should’ve had the wherewithal to notice a bunch of jumping, spinning, and clacking Irishmen…just sayin’.  Other theories including traveling dance salesmen and limited space, but I have to believe everything traces back to that whiskey, myself.

Regardless, Riverdance was certainly an interesting show and I’m glad I can say that I’ve seen it, though I do wish I’d have gotten the ice cream.  And while I am still at a loss to describe it in my own words, I did overhear a gentlemen in the restroom who summed it up rather succinctly – this sort of cultural performance tends to bring out a more sophisticated class of citizenry – saying, “They’ve gotta have springs in their ass – there’s no way!”

One thought on “Lord of the Valentine”