I don’t want to sound like a prissy snoot-bag,

but I fancy myself a bit of wine drinker.  It wasn’t easy to get to this point, as I typically prefer drinks with high sugar and umbrella content, but my (now) wife and I went to great lengths to develop a taste for the stuff in college.  This meant spending what little money I had on lavish dates at expensive restaurants, choking down glasses of wine of that neither of us were especially fond of – often fighting back what we still refer to as our “wine faces” – while politely assuring one another that it was “very good,” and making up the best descriptions we could think of to help hide our disgust, some of which can be seen in the following examples:

“This certainly has a lot of earthiness to it!”

“You can really taste the tannins!”

I suppose we could’ve given up, been honest, and just ordered Dr. Pepper with our steaks, considering that I occasionally – and this seemed to be true of the most expensive wines we tried – wanted to drag my tongue across the carpet just to numb the flavor receptors, but by God, that’s not the attitude that made this country great!  What if our forefathers had given up on westward expansion, and instead been content to stay in New England growing maize and burning witches?  I’ll tell you what – we’d all be forced to support the Patriots,

and the loons that are currently quarantined to California would be living among us!  That’s not the kind of world I want to live in, so we pushed through, and eventually our pallets changed, by which I mean our taste buds died, and we began to actually enjoy wine.  We learned about the wines (they’re made from real grapes…), and the winemaking process (…the kind with pits that you buy accidentally and then throw in the trash while cursing), and began to delve into what makes each varietal unique (usually things you can’t pronounce, like Aïoli, or fahrvergnügen, as in, “You can really taste the Aïoli – and I’m getting a faint hint of fahrvergnügen on the nose!”).  This helped a lot in our quest to appreciate the beverage category as a whole, but we still focused on just one or two different varieties, avoiding anything that might bring back painful wine face memories.  Which is why, some years ago, we decided enhance our aficionado credentials by taking a trip to Napa – the valley, not the auto parts store – in search of sophistication via prolonged drunkenness.  This trip was spectacular because, in addition to being loaded with gorgeous wineries, it turns out that Napa Valley and the surrounding area is just stupidly beautiful.

In my experience, the weather is perfect every day, and everyone there is perpetually happy and relaxed on account of drinking wine with the frequency that the rest of the nation drinks water.  I don’t think my wife and I got into a single argument the entire time we were there, which makes me wonder whether engaging in regular drinking sessions with your spouse may be more effective and cheaper than marriage counseling.  (I’ll do some research and explore that in a future post…). We visited 13 different wineries over the course of three-and-a-half days, all while operating a rental car at or below the posted speed limits, which are outrageously unsafe for people who are in the process of exploring 13 different wineries over the course of three-and-a-half days.  I feel like California could take a large chunk out of their state debt by simply increasing the police presence in wine growing regions and pulling over anyone in a rental car.  I am not suggesting that my wife and I were purposely irresponsible, or that I condo 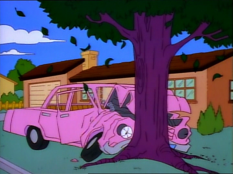 ne drunk driving – we if fact began splitting tastings after the first couple so that we would still be able to navigate the winding country roads without plowing our rental car into one of the majestic oaks that line the valley – I am simply saying that there were times when making faces at myself in the rear view mirror was much more entertaining than it probably should’ve been, and that the California highway patrol may not have found that as amusing as I did.  Potential legal issues aside, we succeeded in absorbing quite a bit of knowledge – by which I mean alcohol – over the course of the trip, most of which came from one tasting in particular.  At a gorgeous winery called Ledson, our bartender asked us what we typically drank.  “Cheap cabs” was my immediate response.  Sensing our lack of sophistication – which may also have been apparent from my purple teeth and tennis shoes – he proceeded to explore our preferences with an off-menu tasting that resulted in the discovery of several wines that we liked much better than cheap cabs.  And the best part was that it cost us no more than the regular tasting!  In fact that was one of the common threads we found throughout the trip – there’s so much wine (and so much money to be made selling it) that almost every tasting ended up including more wines than advertised!  I’m sure tipsy customers buy more wine, but it seemed nice to us.  This might be a good business model for retailers that are losing ground to online shoppers as well.  Sales would skyrocket if retail stores were to begin offering free alcohol to every shopper that walked through the door!  They could probably put Amazon out of business in a year.

When we returned from the trip we were hooked.  We bought a wine fridge and started frequenting tastings at our local shops, the best of which is St. Louis Wine Market in Chesterfield, which does free tastings most Friday and Saturday nights.  You can bring in food, grab a bottle, and hang out.  The owners are friendly and helpful, and seem to genuinely enjoy the people and events.  The other place I’ve hit a couple of times lately is called Cork and Rind in St. Charles.  It’s a neat little shop with a nice cheese selection in the back, though I wish they would’ve opened about a mile south at the Streets of St. Charles so I could’ve gotten fancy wine and froyo at the same place…location aside, I recommend stopping by if you’re in the area.  They do tastings and classes as well, though on a somewhat smaller scale.

Unfortunately – even with all this research and experience – I still know very little about wine, except that I like it, and that the addition of bubbles makes me giddy.  But I’ve managed to perfect my disapproving sneer, and I have a better understanding of when to scoff – for example,

when someone opens an Arbor Mist – so I feel like I’ve made progress.  I’ve also learned how many glasses I can drink and still make it out of bed at 7am for Skyrobics, which is important, because it turns out they put a lot of calories in wine!  I think it helps to robustify the fruit nuances while enhancing the earthy undertones of peet and fig (or feet and pig depending on the growing region) which, I don’t have to tell you, is pretty important!  Without those undertones you might as well be cracking open a bottle of Bartles and Jaymes, and preparing to receive a vicious scoffing!  Or worse, drinking Dr. Pepper with your steak.