Morning folks.  Good to see you.   I find myself coming to you once again from the comfort of an airport terminal, which seems to be my preferred writing locale lately.  It’s a little loud, but it could be worse – I’m told Delta’s systems were hacked this morning, and those passengers are going nowhere fast; suckers!  I wisely chose to fly Southwest, where there hasn’t been a hacking-induced delay in – hang on, they’re making an announcement – approximately 30 seconds. 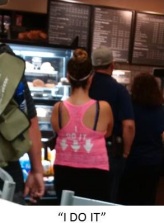 Flying is the worst, but the airport really is a great place to sit and think as you watch new stories unfold, and my brain is good and loosened up on account of the bleach odor in the bathroom, which was strong enough this morning that it condensed on the skin, and left the lungs burning through both sides (order AND delivery!) of the Starbucks line, which was long enough to make one wonder whether they’d been hacked.  Speaking of which, if our enemies really wanted to bring this nation to its knees, that would be the way to do it – forget the electrical grid – if you could prevent the workforce from getting their iced-caramel-non-fat-mocha-frappe-chino-lattés, America would be instantly crippled, such that the Russians could waltz right in the front door and our military generals would essentially say, “Dammit Vlad, I don’t have TIME for you right now!  Just take over Chicago and I’ll deal with you after I get my coffee – No!  I said soy milk! SOY!” (There’s a lot more soy milk in Obama’s wimpified military).

But I digress, my point is this: Baptisms are a lot of work.  I say this because we recently had one for our youngest son, which actually went pretty well, considering there were approximately 475 people in our new home.  To be fair, we’ve been here a month, and we only have the one newborn and a two year old, so we’ve been able to get quite a bit accomplished around the house in that time.  For instance, most of the floors have already been updated with an intricate Goldfish mosaic, consisting of billions of tiny cracker

crumbs that produce the satisfying ‘crunch’ of fresh snow when stepped on.  We’ve also managed to infuse the entire second floor with a seemingly permanent diaper odor!  But even with all that progress, there were still several improvements I had hoped to complete before our guests arrived, such as finding matching (functional) light bulbs, and maybe buying paper towels.  I know what you’re thinking, “You want it all!”, but I can’t help it, I’ve always been this way.

One important update that had completely escaped us, however, was eviction of the ants from our kitchen.  We were pretty sure we’d taken care of that a few weeks ago by dumping little death granules all around the perimeter of the house, throwing down a few Combat huts, and frantically stomping around like we were putting on an amateur production of Riverdance in the dining area.  Unfortunately, it turns out that was a temporary victory, and that the ants had simply fallen back to regroup for their next attack. They launched this assault after the family had left for church the day of the baptism, and had infiltrated nearly all the way to the laundry room by the time we returned home.  There’s no telling what led them to attack at that particular moment, though I suspect that their scouts reported a quiet front littered with scads of free food that had been dropped by multiple small children and adults that were forced to eat standing up wherever they could find room, due to the kitchen table we ordered taking TWELVE weeks to come in – thanks a lot Carol house – but regardless, we got them pushed back again with more stomping, and a little mopping help from my mother-in-law.  The remainder of the party went off without a hitch – only one bleeding head wound – and everyone was tossed out the door with sincere hugs and tubs of parting cake in time for a nice afternoon nap.  But this peace would be short-lived, as our ever-vigilant enemies once again gathered strength in their hidden fortress beneath our deck.  They attacked after dinner – seeing that our thinking had been slowed by a glut of leftover brats and pasta salads – the first wave pressing forward to establish a base under the rug.  An expeditionary force followed close behind, spreading out further across the tile, using the pattern of the floor like a giant ceramic gilly-suit to camouflage themselves as they ventured deep into enemy territory.  Fortunately, I was still alert enough to notice moving crumbs and realize that we had once again been invaded.  Beings as how our guests were gone and the kids were in bed, I decided to resort to chemical warfare, and laughed maniacally as I began spraying Raid all over the kitchen.

Now once upon a time, I had bought Raid for indoor use that had a pleasant, milder scent, and was designed to kill only bugs, leaving dogs and small children with only minor retardation, but I’m pretty sure this wasn’t it.  In my evil euphoria, I unwittingly managed to fill the house with a noxious cloud of deadly neurotoxins – minus 1 dad point… apparently I had inhaled a little too much of it as well, because the immediate solution I chose – turning on the microwave vent fan and opening the patio door – resulted only in air support for the ants in the form of an elite squadron of fluttering moths.  Thankfully my wife was there to point out the stupidity of that decision.  Thinking as quickly as my Raid-addled brain was able, I closed the patio door and opened the door to the garage instead, going so far as to place a fan out to circulate the stagnant 90 degree air through the kitchen, and then retired to the basement with my family.  That was surprisingly ineffective as well, but I was out of ideas – that is until my wife, who had inhaled far fewer chemicals, asked why I hadn’t just opened the windows.

She took care of that, and we all hid for another hour or so while the A/C did it’s best to cool the entire neighborhood.  I packed a suitcase in the meantime, figuring the best solution was just to leave for work for a few days and let the situation work itself out, but the universe had one more fun surprise in store for us that my wife first noticed as wetness on her arm as she held our infant son.  Historians write of great tragedies and of the heroes that rise up to face them, and I would like to believe that we will one day live on in verse for our actions that night, after realizing that the wetness was due to an epic baby turd that was far too immense to be contained within a level 1 diaper, and had instead been forced up and out, soaking through a onesie that will subsequently be burned, and coating the child’s back nearly up to his hair.  It was disgusting enough that his baptism was likely invalidated, but we reacted calmly, like the experienced parents we are; “OH MY GOD!  I NEED YOUR HELP!” shouted my wife, “It’s all over my arm!” “Eeeeeeeeew!” I helpfully replied, “I don’t want to touch him!” Emergency bath time ensued.  I wanted to wash him from a distance with the toilet brush, but was overruled, so instead I

headed back to the kitchen and grabbed a mop to clean the chemicals off the floor before our two-year-old woke up and started eating off of it again.  Drawing on all my grocery store maintenance experience I deftly sopped up large pools of Raid, and then, with the finesse of a professional janitor (or “sanitation engineer”), knocked over a giant cake box, dumping sugary crumbs all over the floor again.  With that, it was time to head for bed.  The child was clean, the invasion had been pushed back, and I fell asleep to the sound of my wife cursing as she stomped the life out of the last few survivors.  Here’s hoping they don’t regroup while I’m gone and carry the family away…assuming my plane ever takes off.