So I don’t know about all of you, but I don’t care much for the process of getting fit. I like being fit, but apparently I don’t just stay fit no matter what anymore. Apparently I have to work for it now, which is total crap.  I blame my advancing age, and I don’t like it.  In fact, I think I’ll have another drink just to help me calm down and focus here…In my last post, we talked a little about all the things that have kept me from writing lately, and it turns out they – along with a healthy dose of complacency – have also kept me from working out for the last few months.  I desperately wanted to be running around, playing outside, getting tan and drinking Kool-aid, but the so-called “trained medical professionals” advised against it (even the Kool-aid!).  So did my wife, who – based on her aversion to me playing kickball, volleyball, Ultimate Frisbee, and skyzoning while she watches the children alone – must desperately want me to sit around all day and get fat, which is exactly what’s happening.  I’ve started to notice advancing softness in my abular region, along with a definite flopping of the posterior.  Even worse, it’s beginning to advance outward – both upwards and downwards – from my midsection, such that I’m beginning to look like a middle-aged engineer!  This is obviously unacceptable, and difficult to comprehend, considering I’ve been religiously eating nothing but LEAN Pockets every day for the last 13 years!

[Sidebar: 13 years of lean pockets every day at the office, assuming a standard 140hr man month (and accounting for a couple of meals out each month) equals approximately 2200 Lean Pockets consumed since starting this job, and with roughly 30 years left until retirement – assuming the same numbers, which is reasonable because I don’t like change – there are on the order of 4900 to go.  I feel like I should get some kind of endorsement deal, or free bypass or something!]

So clearly my diet is not the problem, which leaves only exercise.  My toe is back to 100% now though, so I made a resolution to recapture my former glory and, in order to force myself to complete this goal, signed up for yet another obstacle race at the end of this month!

should look cool on a T-shirt, and consists of ~25 obstacles over 6.4 miles on a course north of Chicago. As of this writing, I have completed exactly 0 minutes of what I would call “training”.  I did spend an hour or so with a buddy at the Ninja Warrior training gym, but that time was mostly spent in conversation about what we should try to swing on next, and how easy all the climbing/swinging/hanging would be if only we had more callouses on our soft keyboard hands.

“Oh yeah, I could TOTALLY do that, no problem! It’s just that my hands are really sore…my muscles are TOTALLY fine though, you know?”

“Yeah, totally – mine too. Wanna get some water?”

I think it’s safe to assume this race will kill me, but apparently this is my “thing” now. Also, the last obstacle race I ran resulted in a disappointingly small number of muscle-flexing photos, so I really had no choice.  Without those pictures, my Facebook friends will never know how awed they should be by my ‘friendship’!  Plus it’s a new race, which means I’ll get a new medal for the wall, and that means yet more bragging rights!

I found out about this race via targeted advertising on Facebook, which is also how I end up finding out about all sorts of cool new superhero shirts, and how I stay abreast (Get it?!  My wife didn’t care for this joke…) of the latest VS collections. Darn you Internet cookies! And speaking of cookies, I found THESE at the grocery store tonight as I was buying celery, in what seemed to be a case of real-life targeted advertising. 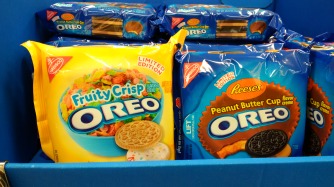 BUT NO COOKIES FOR ME, because as part of my effort to get fit again, I declared this to be #NodessertJuly – which, for those of you keeping track, is the exact opposite of #SummerofDan.  It’s terrible, in fact, and will most likely result in #AugustofGluttony, but that’s a problem for future Dan to worry about.

It actually hasn’t been going very well at all…I started out pretty solid, but by day 7, people were starting to bring me desserts, and turning that kind of thing down is just rude.  So instead I ate them, and then ate some more, because baked goods are the Janice to my Chandler…I just keep going back.  But the effort continues.  Just because this has become #SomedessertJuly doesn’t mean I can’t still press towards slightly less grandiose goals.  Instead of reaching for the stars, maybe I’ll just reach for the Star Crunch

on the top shelf!  The cupboards are tall, so technically it’s still a stretch goal.  And with that decision made, there’s nothing left to do now but get my #jigglybuns outside and run them around the block a few times a week!  Not now, obviously, because it’s dark out.  And kind of humid.  And I had a big dinner…but soon!

Unfortunately, there are several major extenuating circumstances that have thus far prevented me from doing that, the most prohibitive being the weather.  It’s been approximately 1100deg in the shade lately, and that’s degrees Kelvin. That’s also assuming you can find any shade, because most of the trees have spontaneously burst into flames over the last several weeks, letting out little muffled tree screams as they burn to the ground.  You can hear them over the glorious hum of the air conditioner in the afternoons.  It’s eery – like Google knowing what you’re going to type before you type it, even when it’s obscure.

So considering that it looks like Yellowstone in the 90s

in the neighborhood, and that the oppressive heat is beating down to the point that I can barely stand to be next to the windows, there’s really no way I can run right now. Unless you consider treadmills a viable option, but I find it hard to think of anything more mind-numbingly dull than running one of those stupid things.  Plus I probably don’t have the necessary foot-callouses for it, even though I’m sure my muscles would be fine running on a treadmill all night long…totally.  I’m gonna grab some water while I consider my options.