So I don’t know if this has ever happened to anyone else, but I recently got old.  I’m suddenly eligible to run for president (which, given the current cast of cartoon characters running, may not be a bad idea) and I don’t care for it.  The real kicker here isn’t even that I’ve made it to 35, which is impressive in itself, it’s that I never saw it coming.  Old age just kind of snuck up on me one day – like an electric car – and BAM!  I’m careening towards middle age.

To be quite honest with you, I’m not sure how to handle this.  The first thing I did was pretend nothing happened, which actually went pretty well,  but shortly thereafter I began to consider how I’d gotten here, and I wondered, had there been warning signs?  I mean sure, there were general aches and pains, but I figured that was just the result of forcing a body built for video games to do exercise of any kind…and then it occurred to me; I got a physical last year because it ‘seemed like a good idea’, and I recently spoke to a broker about lowering portfolio risk!  I own enough suits for a WHOLE WORK WEEK, which is ridiculous, because I wear jeans to work.  I have a fridge full of Mountain Dew that’s never opened, and a fridge full of wine that’s wearing out.  And speaking of things wearing out, there are Ace bandages and braces of every kind floating around my house.  Furthermore, I get cranky if I’m not home by 10:30 – even on weekends – and I firmly believe that anyone making noise on the street after dark should be hauled off to jail and violently deloused by a large inmate named “Rough Larry.”  Also, if you were reading carefully, you will have noticed that I typed “furthermore” without even thinking about it!  But the jig is up – the image in the mirror is finally clear, and it’s essentially time to put the coroner on speed dial.  This is a frightening revelation.  You wake up every morning, go to work, have a kid or two, and all of a sudden you’re getting colonoscopies and living on Jell-O in the nursing home – which you can’t even enjoy anymore now that Bill Cosby turned out to be creepy – so seriously, you might as well just huff your joint cream and let your wheelchair roll out into traffic.

So what to do?  Well I don’t know about everyone else, but – given that I didn’t have the money for a sports car –

I declared 2015 to be the Summer of Dan, and planned every ridiculous activity I could find.  This probably should’ve been identified as an unhealthy cry for help, resulting in the sort of intervention that would bring me to my senses and get me to “settle down” and “act my age”, or perhaps “consider my family” before “scaling a mountain in Italy with no training or skills”

…but lucky for me, I hang out with a bunch of enablers.

This is how, at the urging of one of my more persistent enablers, I came to both qualify for and compete in the Granddaddy of all mud runs; the Obstacle Course Racing World Championships.  This is an international competition of the most elite obstacle racers in the world, many of whom appeared to do this for a living.  Neither one of us had ever thought of obstacle racing as a ‘sport’ per se, but the people standing around us at the event were very serious, and appeared to have been bred for war – and not the modern kind, with aircraft, and guns and precision insertions – no, I mean the kind where you march across vast continents with the huge clubs and shields you will eventually use to bludgeon your enemies to death before feasting on mutton and mead.  These people were Vikings.  Many had shaved heads and vast swaths of tattoos, with shoulder-to-waist ratios approaching 3-to-1.  Even the announcer looked like an Under Armour mannequin…and then there was me and my enabler.  Built like engineers, because that’s what we are; the kind of people these guys take along to snack on during the trek.  They had trained and researched and prepared, whereas I had jogged around my neighborhood 5 or 6 times, for a grand total of maybe 10 miles.  I had also eaten a great deal of ice cream leading up to the big day, and made no changes to my workout routine, assuming that tennis and trampoline aerobics would prepare me, because I am an idiot.  But there was no going back at that point.

The course was tough – set in the bluffs north of Cincinnati – with 53 labeled obstacles and countless other natural obstacles that they didn’t bother to tally.  You may have heard older people talk about the hardships they endured as children, such as lengthy walks to and from school that were somehow uphill both ways.  I am here to tell you that I now believe them, because this race was run in their old neighborhood.  Everything was vertical and steep.  Occasionally the track would turn downhill, so that it could then double back and turn uphill again a short while later.  By the fifth mile I no longer had the energy to whimper.  I saw people go down with rolled ankles and cramps; my buddy saw a woman carried off the course on a stretcher.  I rolled an ankle while carrying a 50lb sandbag along a slope, but luckily a long trudge through an icy river a short time later kept the swelling down.  Around 6 miles I grabbed a packet of turkey jerky at one of the hydration stations and, in an effort to keep from touching it with my disgusting hands, dumped what I could into my mouth while on the run.  It tasted like Thanksgiving, but felt like I was chewing an old car tire. It was only when I had chewed through all but the last stubborn piece that I realized I had been gnawing on the desiccant pack for the better part of a mile.

To make matters worse, I thought the race was 8 miles long when I started, and found out around mile 6 that it was actually 10.  Lurching past the 8 mile sign was pretty disheartening, “But hey,” I thought, “more obstacles to climb!”  Unfortunately it was around that point that the link between my brain and legs was severed.  My head said “RUN!”, my lungs said “Okay!”, but my legs said “What?! Seriously?! Are you KIDDING?   I just…I mean, really?!  No.  No!  You go to hell!” and essentially went on strike.  I was still able to maintain a solid walking pace – jogging in short spurts – but it turns out there was no bargaining with the leg union – the constant steep inclines and declines (several so steep that they required ropes to accomplish) had taken their toll, and there would be very little running until the end.  Thankfully my brain maintained control of my upper body, so I was able to push through the remaining obstacles without much trouble.  Despite these internal struggles, my legs somehow sprung back to life after the final obstacle and I finished strong.  I high fived the race announcer as I crossed the line, along with several other people that were probably just passing by on their way to get sandwiches – I didn’t care.  I was so excited that I ran right by the woman with the medals without even noticing and headed to the water table, where I enjoyed the single most delicious banana in the history of bananas. 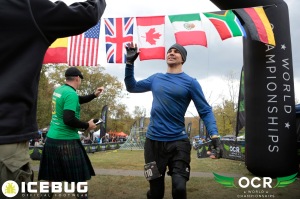 Overall it was a great, if trying experience.

It turns out there were actually cash prizes for each age group, none of which I won; nor did I end up on any podiums, but I defeated every obstacle and earned my medal.  I competed alongside some of the fittest, most resilient competitors from 22 countries around the world – which to me was really cool – and finished strong.  So while I didn’t make it to the medal stand, or earn any prizes (I came in 36th/120 and in my age group, and in the top third overall) it definitely felt like a victory, and I’m considering retirement while I’m ahead.

Now if you’ll excuse me, I have to grab some Advil and go polish the medal again while I figure out what to do next, because I’m not getting any younger.