I woke last week to a strange new world, a world of opposites and impossibilities, devoid of order and reason; still governed by physics, but defying all logic. I was still struggling to shake off the fog of a restless slumber as I sat down at the counter to frost my strudels. Per my standard routine, I reached for my phone to check the memes of the day, and instead found my Facebook feed inundated with posts that were hard to comprehend. One after another made the same outrageous claim, as though some terrible mental illness was sweeping the nation, and had already infected all of my Facebook friends. I licked the frosting from my thumb and raced over to google to confirm this madness for myself. It was hard for my eyes to focus in the darkness of the kitchen, but through the haze I was able to make out headline after headline confirming what my friends had been proclaiming; that the hapless Chicago Cubs – long time punchline of the MLB – had won the World Series!

Let me just start by saying that I am not a baseball fan in general. If forced at gunpoint to choose between watching a mid-season baseball game and say, attending a Dixie Chicks concert, I would probably reach for the trigger myself. That being said, even I can appreciate the gravity of this occasion; we have just witnessed an event rarer than Haley’s comet, which whizzes by at 75 year intervals – relatively frequent by Cubs championship standards – and more historic (though POSSIBLY less culturally significant, unless you ask

a Cubs fan) than the fall of the Berlin wall, which stood for a mere 28 years! So it’s understandable that there’s a lot of excitement in Chicago right now – so much so, in fact, that all four Super Fans immediately dropped dead from cardiac arrest. Sad story.

The rest of the residents seem pretty happy though, having collectively called in sick as a city so they could have a parade, drink in the streets, fornicate, and dye the Chicago River blue with the blood of die-hard fans. Actually they may have used food coloring, it’s hard to say when dealing with crazed sports mobs. Either way it looked pretty cool, and will conveniently be ready for St. Patrick’s Day once all the drunken revelers have relieved themselves in it!

The Cubs win also seems to have boded well for Donald Trump’s election campaign, as they were both pretty clear signs of the apocalypse – though the alternative wouldn’t have saved us either – for as it is written in the book of Revelation,

“And lo, the Lord spaketh upon them, saying,

‘These shall be the signs of the end of times; when the Cubs shalt winneth it all, and either a clinically insane boob or lying criminal slime bag who shouldst be rotting in prison shall rise up to rule the nations, then wilt thou be totally boned, and kisseth they butts goodbye.’”

So we should probably expect the second coming any day now…

The win also probably saved both the club’s manager and their closer from being drug from their homes and publicly flogged. I don’t know much about baseball, but even I know you don’t leave your closer in for 30+ pitches when he’s given up three runs – including a two-run homer – and has to throw sliders because he’s too tired to keep bringin’ the heat! But just when it looked like it was all over, God himself – always a fan of the underdog, and never one for unnecessary violence – opened the Heavens and gifted the Cubs with a short but timely rain delay when they needed it most. I can only assume they spent those ten minutes sacrificing a billy goat in the locker room, gaining favor, and being granted two final runs in the 10th. Regardless, that’s where I went to bed, because it was 11 O’clock at night, and I was pretty sure they had already thrown it all away in classic Cubby fashion.

All in all, though, it was a great series, with the only real losers – besides Cleveland – being the “Major League” fans (myself included) who wanted to see a spectacled 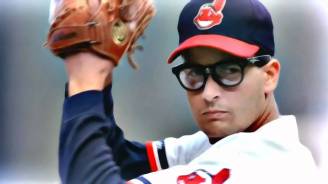 Charlie Sheen emerge confidently from the bullpen to “Wild Thing”, by the Troggs, and throw out the first pitch in Game 7.  Sure, he’s a little crazier than he was when he made that movie, but how much damage could he really have done? I mean yes, you’d definitely want to slather the catcher’s mitt with extra strength germ-o to kill all the syphilis from the ball, but come on, it’s Wild Thing!

I’ve also noticed significant bitterness in my current home town of St. Louis, where some people (specifically, the host of my preferred morning radio show) apparently feel that the Cubs are a collection of young punk hooligans who snatched up a bunch of Cardinal defectors – none of whom were particularly effective in the playoffs, by the way, so take THAT – and stole a championship they somehow didn’t deserve. These Cardinal purists are also quick to point out that it’s the first Cubs championship in over a century; a period during which – they will remind you without prompting – the Cardinals won 11. But you know, congratulations, or whatever. This might seem childish and petty to me if not for the great Brett Favre (pronounced “Jerkface”) scandal of ‘09, when my own team of perennial losers, the Minnesota Vikings, signed our long time mortal enemy – the shovel-passing idiot from the land of stupid Cheeseheads – to play quarterback. The rage STILL burns in my chest when I think about that move, and the idiotic, running, cross-body pass into the waiting arms of the Saints defense during the final minutes of the NFC championship game that ended our Superbowl hopes. Sure, Adrian Peterson had fumbled something like 5 times during the game, but it was Favre that lost it for us, and while a championship title with him at the helm would’ve required an asterisk, it was still our year! To this day I have nightmares of him laughing after that play, tearing off his Minnesota jersey to reveal his Green Bay ‘4’ underneath…so while it’s immature and unsportsmanlike, I completely understand the ire of the Cardinal fans over seeing their hated rivals win it all, though at this point I really couldn’t care less, because I’m just so mad at Brett Favre.