Ladies and gentlemen, I am a creature of habit – which is not to say I’m a stick in the mud – I simply believe there’s a single right way to do everything, and I like it when those things are done on schedule.  I wouldn’t call it ‘curmudgeony’ so much as ‘efficient’, or ‘German’.  For instance, if it’s after 6:30am on a weekday, I’m at work.  By 3:45 I’m at the gym, and by 5:30 I’m home to eat.  (Not quite “Early Bird Special” territory yet, but we’re moving in that general direction)

Saturday morning it’s Skyzone, and Sunday means church and Frisbee.  I don’t care for deviation, which makes me arguably the easiest person in the world to rob, but also gives me some small sense of order in an otherwise chaotic world.  These habits extend to pretty much every facet of my life, including musical preferences, which is why it should come as no surprise that I miss the oldies stations – and not the 70’s and 80’s music that they’re trying to pass off as oldies nowadays – I mean the REAL oldies, by artists like Tommy Roe, Buddy Hollie, and the Beach Boys.  The “Top 40 Bubblegum Pop” genre has long been my favorite, since that’s what I was raised on – albeit hits that topped the charts 20-30 years before I was born.  Nowadays I typically listen to Y98 in the car, because I like their morning show, and they play a solid rotation of today’s happiest tunes.  Even so, I feel like the top 40 has gone steadily downhill since the 60s, suffering through the likes of Boy George, Justin Beiber, and the grunge movement. 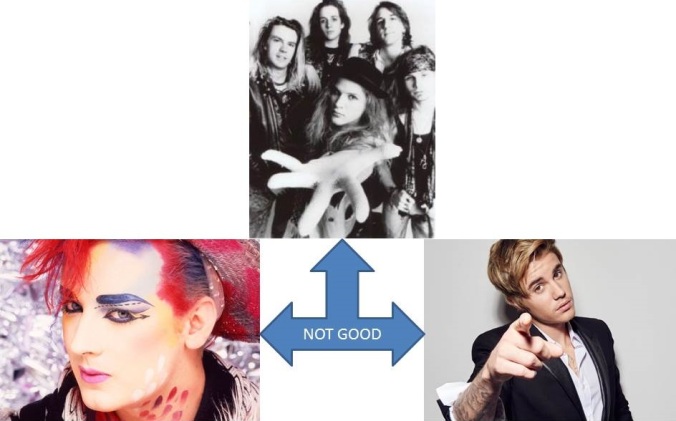 Anymore there’s too much R&B, too many bleeped out lyrics, and my LORD, if I have to hear Adele caterwauling “Someone Like You” one more time, so help me, some record producer is going to receive a very sternly worded letter filled with fire ants.  The brightest spot on the charts – besides pretty much anything Taylor Swift puts out – is all the catchy teenage boy band music from groups like One Direction and Five Seconds of Summer.  Their songs are so upbeat they make you want to car dance like that guy next to you at the stoplight isn’t watching and completely judging you.  At least that’s what they make me want to do, and it usually doesn’t occur to me that windows work both ways until it’s too late.  It’s not easy being a 35 year old straight professional man that sings along with the lyrics “everybody wanna steal my giiiirl, everybody wanna take her heart away…” with the sunroof open, but again, I like happy music, and this is the cross I bear.

Most of the time these current hits are fine, but there are times when this staunch adherence to my own set of made-up rules is tested; for example, even though it’s terrible, I’m pretty much forced to listen to Carson Daly’s nationally syndicated “Daly Download” on the way to Skyzone on Saturday mornings, which is just awful.  Every weekend, as I shovel fistfuls of Waffle Crisp or Oops All Berries into my mouth while driving towards the trampolines, I think, “My God, Carson Daly is terrible, why are people still paying him to host his own show?”  The man exudes all the excitement and vitality of a potted plant.  He’s the Drew Carey of radio.

He desperately needs either a Redbull, or a personality.  And how did he get this job in the first place?  He wasn’t even good on TRL – a show which required no talent whatsoever because teenagers will scream for pretty much anything when you put them on camera, including music videos, street tacos, or denture cream.  Are we really so hard up for hosts?  Was Steve Harvey not available?  And furthermore, how did he manage to convince the television networks that people want to watch his mind-numbing banter with pseudo-celebrities like Jenny McCarthy – whose relevance has waned to the point that they’re more punchlines than people now – while waiting for the ball to drop on New Years Eve?  To me, these are the great mysteries of the universe, though I suppose, given that his competition is Ryan Seacrest, he’s probably not in any danger of losing his gig.  I suppose I could change the channel, but as I said, there aren’t a lot of good options anymore.

I give Carson a hard time, but it’s not just him that makes me long for alternatives; I would also love to have a solid oldies station to flip to whenever Tom Shane took over my primary station to drone nasally on about being my friend in the diamond business.  Good ol’ Tom pops up on the radio about every ten minutes anymore to remind people that he has the best deals around, on account of the fact that he’s constantly making personal trips to the diamond mines and negotiating directly with local warlords in order to bring your beautiful fiancé the blood diamond she deserves for a fraction of what you’d pay at other jewelers!  I’m not sure what he’s negotiating with that gives him all this power – military grade arms, perhaps – but by God, he is going to bring you the best prices possible if it means he has to sell children into slavery!  You can trust him on that, and trust is important when you’re spending five figures on a fleck of shiny rock the size of a kidney stone.  But let’s be totally honest here, hearing that banal voice on repeat doesn’t make people view Mr. Shane as their friend in the diamond business so much as it makes them want to introduce his showroom windows to their buddy Lefty, who happens to be in the brick business.  And is it just me, or have his latest series of ads gotten even more irritating?  Perhaps you’ve heard them – a typical script goes something like this:

Doofus: “Well Tom, I got her some Carhartts and a jar of her favorite pickles!  I think she’s really going to enjoy them!”

Tom Shane: “Well we happen to have her on the other line, so why don’t we rudely ruin the surprise you had planned?  Arlene, your numbskull boyfriend wants to give you Carhartts and pickles for Valentine’s Day – how do you feel about that?”

Spoiled rotten woman with outrageous sense of entitlement and no concept of budgetary restrictions: “Larry, you IDIOT!  I don’t want your stupid pickles!  It’s VALENTINE’S DAY!  I want something huge and sparkly that costs more than your truck, or so help me I am sleeping with your brother and posting the video online!”

Tom Shane: “There you have it folks, ditch the pickles this year, and come to Shane company for all your jewelry needs.  Now YOU have a friend – albeit one that stabs you in the back on a fake radio show – in the diamond business.”

So between Carson and Tom, you can see why it’s so important to have backups.  I’ve looked around for music to download too, but again, pickings are slim.  Pandora suggested the entire One Direction album, but it also suggested a song with the repeated lyric, “do the stanky leg”, so I feel like there may still be a few kinks in their algorithm.  You never had that kind of issues with oldies; because artists used to try harder, writing lyrics that actually made sense, and spoke to a generation of respectable youth.  Lyrics like:

Actually that may not be the best example, but even so, it’s definitely happy, and nothing needed to be bleeped.  It could just be that artists did a more upbeat cocktail of drugs back then than they do now, but whatever the case, I wish we had that music back, and I would be perfectly willing to sell Carson Daly into slavery in a diamond mine to get it.