I never really saw myself as a parent.  I don’t think anyone else really did either, and with good reason – I’m terribly impatient, and in general, prefer things to be as easy as possible.  But that all went out the window a couple years ago when my son was born, and let me tell you, parenting – at least what I can tell from watching my wife – is exhausting.  I cite the following example: I currently have a little boy who is screaming in the other room (wailing, really) – not because he has spaghetti sauce caked and drying in every orifice north of his belly button, which doesn’t seem to bother him, but because he has thrown his tiny fork across the room and no doubt wants it back so he can repeat the process until every wall in the dining room looks like some kind of tomato-based Jackson Pollock painting.

My wife, bless her heart, is remaining calm, though whether that’s due to incredible patience (developed over more than a decade of living with me), or just a general numbness to the pain is hard to tell.  The boy’s propensity for self-expression is a relatively new phenomenon that we’re still adjusting to.  His vocabulary is rapidly expanding, but he says nothing so clearly as “no”, occasionally even emphasizing it by pointing a tiny finger in the air, so you know he’s really serious.  Sometimes I look at the little person he’s becoming – cute and energetic and full of life – and long for the opinionless little blob we brought home from the hospital…he lacked the dexterity to throw things then, and was quieter at restaurants too.  There were a couple of times that we even brazenly brought him along to wine tastings!  “We’re not going to be the kind of parents that stop doing the things they like to do just because they have a child,” we asserted foolishly, “We can just bring him along!”  That plan more or less worked for about 18 months, and then one day, while traveling in Italy, a well-spring of energy burst forth within my son that required him to run – yelling – everywhere he went

, bouncing off walls, furniture, dogs, priceless heirlooms, and anything else that lie between him and his ultimate goal – which may very well change with every bounce.

That being said, he’s gotten much more fun as he’s become more interactive, and I will admit to feeling a twinge of pride whenever I see him throw a ball or leap off a ledge as tall as he is without any rational fear – of course, that twinge could also be my back, because my son exists on a diet of crackers, peanut-butter toast, and grilled cheese, and constantly demands to be held.  He’s a sturdy little dude who loves being tossed onto furniture and swung in the air, much to his mother’s chagrin – but that’s why God gave us fathers – so there would be someone around who gets caught up in the moment and doesn’t think all the way through their actions…and maybe contributes to your first lumps and bruises.  I worked with a guy who used to say that the first thing you should do when you bought a new car was to grab a hammer and go put the first dent in it so you weren’t constantly fretting about where it would come from.  It’s pretty much the same for a boy child – minus the hammer part* – once you ding them up a little and see that they heal it opens up a whole world of exciting new games, which is good, because life is dull without a little violence, and father’s immediately have big plans when their sons are born.  Not that daughters aren’t equally loved, but this is a boy – a tiny bundle of testosterone-laden potential – a fresh mind to shape and mold into everything you were never able to be; someone to carry on not only your name, but also your crazy dreams.  I’m sure a lot of fathers begin planning camping trips, or hunting excursions, or Heisman trophy celebrations when their sons are born,

but I think what I’m most excited about is having a valid excuse to watch cartoons again.  Since my son was born I’ve been scouring the airwaves in search of the best new offerings, and let me tell you, pickings are slim – cartoons have gotten strange.  From the poorly drawn doodles of “Adventure Time,”
to the disturbing (if entertaining) mix of animation and real-life footage that make up “The Wonderful World of

Gumball”, evidence of the sad death of the classics is everywhere.

Gone are the days of the Disney Afternoon that raised and guided us 80s children through our youth – THOSE were good cartoons – and educational!  For instance, Ducktales taught me that money is indeed the source of happiness, and to be wary, because people are always out to steal it from you, leaving you nowhere to swim; and the Rescue Rangers were shattering glass ceilings before it was en vogue by featuring a female mystery-solving engineer – who was also, biologically speaking

, a disturbingly cute cartoon mouse – which contributed to a pretty distorted view of what engineering school would be like.  My shattered dreams aside, I believe that these are the kinds of mentally stimulating programs that the children of today desperately need…and obviously Teenage Mutant Ninja Turtles, because they’re cool and kick stuff.  I’ve actually heard that they’re bringing Ducktales back, and I’m thrilled – my only concern is that they’ll try to ‘modernize’ it and do it as a God-awful CG cartoon versus the classic – and far superior – drawn style.  Time will tell whether I have to write the Walt Disney corporation a scathing letter about destroying what could’ve been the greatest comeback since the return of Hostess brand snack cakes.

But alas, for the time being, Ducktales and Rescue Rangers have been replaced by Japanimation and adult humor.  That’s not to say there are no standouts; for instance, I’m a big fan of “The Fairly Oddparents”, in which an awkward boy discovers he has Fairy Godparents, along with an excitable father that enthusiastically yells every one of his lines – the voice acting is second to none in this one.

Unfortunately my son is not interested in any of those shows at this point, instead preferring to watch some of the most inane drivel that has ever been inflicted upon the television viewing public – worse even than ‘Dancing with the Stars’ or “Keeping Up with the Kardashians.”  It is because of my son’s television preferences that I have lately found myself daydreaming about setting Elmo on fire. 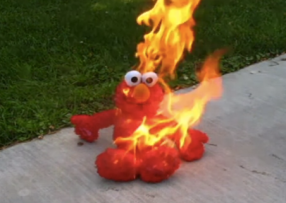 I also have a healthy revulsion for Daniel Tiger, and don’t even get me STARTED on crap like the Wiggles!  I don’t know what – if anything – I watched at this age, but if anything so heinous as these shows existed during my childhood, I would like to send my sincerest apologies to my parents/babysitters/daycare providers/etc.  I assure you all that I have finally, 30+ years later, gotten my comeuppance.  And if anyone out there reading this is even partially responsible for the mind-numbing dialog or terrible songs that stick in your head to the point that you would willingly slam your face down on an icepick just to make the music stop, you had better hope that we never meet in a dark alley, because I have some plans for you, neighbor.  I believe there’s a special place in hell for people that produce this kind of children’s programming, and I would not be opposed to seeing them check in sooner rather than later, if you catch my drift.

Unfortunately there’s no time to hunt the guilty parties down now, because my son has returned from the bathtub and is digging humidifier parts out of the closet instead of sitting idly in front of “Dinosaur Train” and allowing my wife and I to briefly ignore him like we had hoped.  Meanwhile, the little dinosaurs are dancing happily through their ‘A to Z’ song in the other room, and I have to find my icepick.  I do desperately miss the quiet sometimes, but seriously, how cute is this? 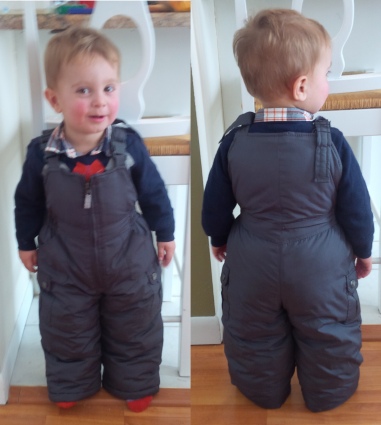 *Unless you’re REALLY sure his mother isn’t looking…