Well it happened; the inevitable day of my reckoning arrived… the appointment that had seemed so far off when I made it snuck up on me like a burp on a baby.  There was so much time between my consultation and the surgery that I’d totally forgotten about it, and then the reminder calls started.  “Press 1 to confirm this appointment” the automated voice would say, never giving me an option 2, and each time I would pause to cringe before responding.  With the day fast approaching, I figured I should finally read through some of the documentation they’d provided at my first appointment.  After all, there’s nothing like 2 pages of wiener diagrams with holes and tubes dangling out to put a man at ease!  Though to their credit, they did include a “Fact” section that included the following assertions:

FACT: Testosterone levels will not be affected by the procedure, so desire and hair growth patterns won’t change. Your voice will remain the same as well.

Hilarious, and more importantly, it reminded me to bring an athletic supporter.  I don’t know how many women in the audience are familiar with these pointless dingle slings – my wife certainly wasn’t – but they’re awful.  They consist entirely of a thick elastic 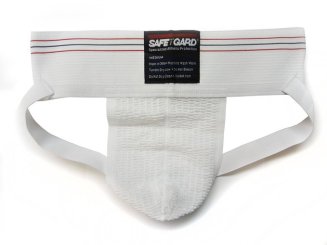 waistband, a tight pickle pouch, and two straps that flank your buttocks in a very unnatural way, such that when you put one on, your ass cheeks are left to swing in the breeze while framed by unattractive support bands.  I can only assume they were designed as torture devices for otherwise well-adjusted 5th grade boys, as that was the last time I was forced to wear one.  To this day I would sincerely like to punch my idiot gym teachers in the face for requiring all boys to wear jocks during class.  That was also the only time I’ve ever been forced to shower with other men – another entirely pointless requirement devised for the sole purpose of leaving mental – and sometimes physical, depending on the towel-snapping skills of one’s classmates – scars on preteen boys.  The only way to get through this humiliation was to imagine the similar scene that we KNEW was playing out in the girls locker room RIGHT NEXT DOOR – with the suds, and the giggling – and hope the jockstrap sufficiently hid your reaction.  But I digress!  After realizing the jockstrap requirement, I had the flowing conversation with my wife:

“I finally read the vasectomy information,” I announced, “and I need a jockstrap.”

“Where do you get one of those?” she asked innocently, “Dick’s?”

“Seriously!” she asserted, “There’s one by my office, I could stop and get one – what size do you need?”

While that was an honest and legitimate question, I had to explain that buying a jockstrap for a guy should be like buying clothes for a woman, only the opposite – where a man should always buy the smallest size available and claim that he thought it would fit, a woman should know to automatically come home with an extra large jockstrap for her man, if for no other reason than to hold his ego. “That being said,” I muttered, “probably small.”  As if this indignity weren’t enough by itself, my wife managed to walk into the bedroom the next day as I checked to see if it fit.

“No seriously, just for a second.”

“Oh my GAWD! I don’t understand! Where’s the back?! And where do those straps go?!”

“No really, turn around again, I just want to…”

It was fifth grade all over again – only this time I couldn’t hide the strap in a pencil case and throw it away.  And actually, my mother found that in the garbage at the time and it came back to me, like some sort of demonic Ouija strap…

At this point I had my required support garment and had made my peace with God, but there was still one step remaining before I could walk the Green Mile to the urologist’s office, and I was looking even less forward to it than I was to wearing my assless blueberry scoop.  It was time to shave.  I will spare you the details of this arduous and supremely delicate operation, save to say that neurosurgery would’ve been simple by comparison, and that I have never used so much shaving cream in my entire life.  Things were stretched in ways that have surely been outlawed by the Geneva Convention, and afterwards I could only look at my wife with shame in my eyes, like a dog wearing a cone. 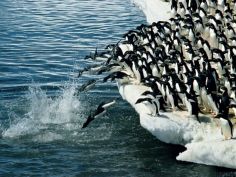 One more restless night and it was time.  My wife drove to make sure I didn’t run and, with the brave resolve of that first penguin that gets reluctantly shoved into the ocean to check for seals, I walked through the door.  Another man hobbled out while I waited for my name to be called – alive, but definitely uncomfortable – anxiety built.  The nurse called me back shortly after; I fought a nervous laugh, nodded at my wife, and rose to follow.  I later found out that, as the other guy shuffled out the door, he leaned down to my wife and – displaying the kind of noble solidarity usually reserved for military men – said, “He’s here for the same thing as me, I can tell.  Poor guy – good luck.”

Once inside the chophouse, I paused at the restroom and promptly dropped my sunglasses in the toilet for the second time in a month – things were going great.   I collected myself and sat down in the room, where they measured my blood pressure – quite a bit higher than usual, given the circumstances – and gave me a large napkin with which to cover myself.   The nurse left, and I sat bare-assed on the table for ten minutes, nervously twiddling my thumbs and contemplating escape.  Unfortunately, the doctor eventually arrived. He offered some words of comfort: “Don’t sit up at all during 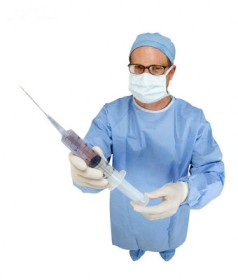 the procedure, it lifts your balls,” and tore open the napkin to begin.  The worst part of the whole ordeal, aside from the general humiliation of having your toys tinkered, was the seemingly firehose-sized needle they jammed into my unsuspecting satchel to numb things up.  I would rather be anesthetized with a billy club than ever endure that again.  After that though, it wasn’t bad – some awkward small talk and the smell of smoke (“Do you guys smell something burning?  Oh right…me.”), and in about 20 minutes it was over, though my thighs are still tense as I write this.  I texted my wife as the nurse went to get her from the waiting room for care instructions, “The doctor said he’d never seen so much blood…”; a jokester even with fresh holes in my scrotum!

So now it’s over, and here I sit in the firm and welcoming embrace of the jock, confined to the couch and diligently icing my tadpole – I fell into a frozen lake once and it was terrible, but I have never been more excited to have ice on my giblets than I am today.  I have to be on an airplane in less than 72 hours, so maintaining a chilly willy is of the utmost importance because as the nurse – who stood by and needlessly stared at my tackle box for the entire procedure – said, “You’re not going to be happy if it swells, because there’s nothing we can do.” I assured her – in a voice only slightly higher than the one I arrived with – that she would not have to tell me twice.