Ladies and gentlemen – and people that read this blog – I suggest that you all go out and buy very powerful telescopes immediately, because the stars have begun to align for a once in a lifetime series of events that you do not want to miss – and also because it’s fun to see what your neighbors do at night.  But that’s a topic for another blog; the reason I’m here today – aside from the fact that Monday is blog post day – is that the next 12 months are shaping up to be theatrically spectacular, and I am not referring here to the ongoing presidential race.  No, it appears that our lobbying has finally paid off, and Hollywood is set to release a wave of Cinematic Nerdvana that promises to sweep over the nation like a tsunami of pimple cream, leaving heaping piles of adolescent male excitement in its wake.  I don’t want anyone to choke on their retainers here, but lately my twitter feed has been abuzz with movie trailers (courtesy of IMDB), many of which I find it difficult to talk about without first taking a deep breath off the old inhaler.  Perhaps you’ve seen them too – or perhaps you’ve been too busy engaging in outside social activities, such as Quidditch, or words with friends, or not talking to girls to notice the announcements.  Either way I’ve got your back, because I believe it is my solemn duty to keep the approximately 15 people who read this blog (Hi mom!) informed.  So with that said, let’s hop in the metaphorical DeLorean and take a look at what our future has in store…

The first, and arguably most anticipated movie of EVER opened a week ago, and pretty much every nerd on the planet immediately had to change their pants.  I was one of them.  This little 70’s throwback film from Disney debuted to a significant amount of fanfare, which is to say, “Roughly 14 gazillion dollars worth.”

The title was awe-inspiring, “Star Wars: The Force Awakens”- but they could’ve called it exactly what it was, “Star Wars: The Epic Nergasm”, or, “Star Wars: The Money Printing Machine”, and I wouldn’t have cared – it was spectacular.  I’ve seen it once, I’ll see it again, and it will live forever in my collection on BluRay.   That’s right – physical media – cause I’m an old school nerd.  I like Nibbles too.

So this seems like a stupid concept to me.  He’s superman, what are you going to do?  “Oh you built a neat little car with machine guns and bat wings?  That’s great…” ^EYE ZAPPED!!^

And how the heck does wonder woman fit into this?  I imagine the conversation over at Warner Brothers went something like this:  “I bet we’d sell more tickets if we could find a way to a parade a hot twenty-something around in little shorts – get on that!”

And finally, you’re telling me the Facebook guy is Lex Luthor?  Why not just get the Macintosh kid?  He’s not working either!  I feel like – with the exception of the Dark Knight series – DC has done a terrible job with their characters.  And yet, I’m still going to go see this because, come on – you know as well as I do it’ll be flying, punching, exploding good time…plus those little shorts really do look pretty good.

Captain America makes me want to do pushups.  I have been bouncing off the walls ever since this preview came out – I get goosebumps and giggle every time I see it, just like a real superhero – after Star Wars, this is the movie I’m most excited about.  I never read comic books growing up, which apparently left a huge empty hole in my soul.  Thank Thor that Marvel has stepped up to fill that superhero void in my 12-year-old psyche with hit-after-awesome-blockbuster-hit!  With the exception of Iron Man 3, which had a stupid villain, Marvel has delivered pretty much every time, and I definitely trust them with my $12.  Not to mention the roughly $200 worth of Under Armour superhero shirts that are currently sitting in my dresser,

all of which are way too tight to wear outside my house – which is fine, because all I want to do when I put them on is stand in front of the mirror and reenact scenes from the movies, punching imaginary bad guys across my basement, and then yelling, “Nothing!” up the stairs when my wife asks what’s going on.  Sometimes I just strut around flexing until I’m worn out.  Rumor has it there’s going to be a Spiderman cameo too!  Not seeing this movie is a sure sign that you hate America, and I’m telling both the Captain, and homeland security.  I’m also lining up babysitters.

This movie makes the list for one reason and one reason only: Bebop and Rocksteady.  If those two are introduced, then Krang can’t be far behind, and there’s no way they do Krang without the Technodrome!

I don’t care how bad the acting is – if a bunch of giant amphibian martial artists eating pizza in the sewer with a huge rat before fighting a disembodied brain with arms who drives a huge subterranean bubble with an eyeball on top doesn’t bring back wonderful memories of childhood, then you’re clearly dead inside.  Or maybe you didn’t grow up in the 90’s.  Either way, we’re done here…oh, and it doesn’t hurt that it also stars the lovely Megan Fox – that’s some serious nerdnip!

Oh.  My.  GAWD!  The aliens are back – with even bigger ships – and this time, they’ve installed virus scanning software!

Earth’s only hope is that their subscription runs out before they’ve shot down all our planes!  Thankfully Jeff Goldblum is still around, so I like our chances.  It’s hard for me to believe that it’s been 20 years since the original came out, because ID4 was essentially my introduction to big summer blockbuster movies; the mindless, far-fetched, chest-thumping sci-fi adrenaline-fest that started my love affair with PG-13 violence.  For that, I thank them, and definitely plan to see this.  I am, in fact, loading up my cargo shorts with cheap milk duds and Junior Mints from Walmart as I type this, just like I did for the first Independence Day.

I know these reboots haven’t been as acclaimed as their predecessor movies, and that they haven’t made gobs of money for the studio – but I like them.  Kirk is cool, Scotty’s entertaining, and they got Leonard Nimoy to guest star!  What more do you want?  Sure, the new Spock is Sylar – a character I loathed so much in Heroes that I quit watching during season 2 (also, it was terrible) 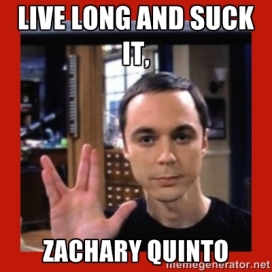 and still can’t disassociate from Zachary Quinto
– but if you can ignore that fact, they’ve been fun, action-packed romps through space, and who doesn’t like that?  Also, did I mention that Uhura is pretty much the sexiest space officer this side of the neutral zone?  Or that Zoe Saldana has now starred in the Nerd trifecta – Avatar, Guardians of the Galaxy, AND Star Trek – and been beautiful in three different colors?

Her nerd cred should more than offset any ticket sales lost due to Zachary Quinto’s creepiness.  I’m predicting another hit!

So there you have it!  Throw in both Deadpool and Gambit origin movies, X-men Apocalypse, and the Ratchet and Clank animated movie, and it’s a good time to be a nerd!  Sure, a lot of the ladies out there will probably prefer to skip most of these, but it’s no big deal – statistically speaking, the target demographic probably didn’t have anyone to bring anyway!   Happy watching, and may the force be with you as you live long and prosper in truth, justice, and the American way.  Cowabunga!